You are here: Home > Our Portfolio > Urban Design

Like many couples of retirement age, Glenn and Joan Johnson moved to a lakefront community so they could be close to the water. As time passed, however, the allure of city life grew stronger.

“When I reached retirement age we bought a place on the lake and now, as we get into our later years, we thought it would be better to come back to London,” Glenn Johnson says.

After living in St. Joseph, north of Grand Bend, for 15 years, the couple decided to return to London as a matter of practicality. They wanted to be closer to their family, as well as to shopping and medical facilities.

The Johnsons purchased a lot in a new community, Treetop Hill, in Old South London. They were attracted to the development’s location at the end of a long laneway off Baseline Road, well away from the noise of traffic.

The couple appreciated the freedom of being able to contract the construction of their home to the builder of their choice, Oke Woodsmith. Their priorities included a separate main-floor office large enough to accommodate two desks, as well as adequate filing and storage areas.

Although they wanted the option of living entirely on the main floor, Oke Woodsmith suggested they install an elevator shaft in the event they became disabled and still wanted to have access to their lower level.

Before they began drafting a design, they visited the Johnsons in their home in St. Joseph to determine how they used their living space. They also assessed which furnishings would have an impact on the design of their new home.

“As a result, they were able to build in some of the antique furnishings that we have and make places in the house for them,” Glenn says.

The dimensions of the sitting room at the front of the home were tailored to accommodate the couple’s antiques and exotic furnishings, which include a finely carved cocktail table they purchased many years ago in Hong Kong. A round exterior wall and a curved tray ceiling draw attention to their delicate chairs and settees.

In the dining room, across the hall, walls were recessed to create alcoves for two antique buffets. A recessed wall in the dinette at the rear of the home accommodates an ornate wooden bench.

After a three month design period, construction began in April 2008 and the 2,900-square-foot home was completed 11 months later.

It was challenging to position the home on the lot and make the shallow rear yard useable. The Johnsons particularly wanted privacy as well as an attractive front yard, which faces the street.

“Subdivision design is certainly different from estate design,” Oke Woodsmith says. “Designing it is one thing; constructing it in such a tight space is another. You’ve got to be very careful how you plan things. It’s more restrictive in building, but when it succeeds, it’s that much more rewarding.”

Oke Woodsmith was able to raise the home, allowing them to create a lower-level walkout off the main entertainment area at the side of the home. Stone steps lead to the front and the back of the home where a stone retaining wall forms a backdrop for a waterfall that’s edged with ornamental grasses and evergreens.

A natural theme was created at the front where curving flowerbeds, studded with spiky grasses and burgundy-coloured hydrangeas, complement the stone exterior. A steeply pitched roof and a front entry, defined by square pillars and arched stone work, lend the home a sense of presence.

A heavy oak door with leaded glass panes opens in to the foyer, which is balanced on the left by the dining room and, on the right, by the sitting room. Past a curving staircase that leads to the lower level, the great room forms a central entertaining area at the rear of the home. A detailed coffered ceiling, a wall of cherry cabinetry and burgundy leather furnishings impart a library ambiance.

The great room provides access to the home office, on the right, and the kitchen/dinette, on the left. “I think it’s just a comfortable home – it’s functional and it’s great. Our office is very handy,” Glenn says.

The kitchen allows for maximum traffic flow throughout the central areas of the home. Joan says the open-concept design makes it easy to entertain 15 guests for holiday dinners.

A cherry island with a raised-ledge granite counter separates the workspace from the dinette. The island, with its fluted pilasters and carved corbels, creates a dramatic contrast to the painted cabinetry that lines the perimeter of the workspace.

French doors open out to a covered patio that incorporates a casual dining area with a barbecue. “That was an important part of the design,” Glenn says.

The master bedroom retreat, located off the dinette, features two walk-in closets and french doors that open out to a gazebo with a view of the waterfall. The ensuite bathroom includes a glassed shower, a concealed laundry area and an oval bathtub positioned between two marble-topped vanities.

A curved stained glass window above the bathtub depicts scenes of St. Joseph, from vibrantly coloured Canada geese, blue jays, cardinals and orioles resting in trees to a white squirrel foraging for food. The panels provide privacy and a focal point in the bathroom.

On the opposite side of the kitchen, a rear hallway leads past a pantry to a two-piece bathroom and a two-car garage.

Although the Johnsons spend most of their time on their main floor, they also enjoy their lower level. It includes a spacious entertaining area with an oak bar and gas fireplace, a sewing room for Joan, a laundry room and two guest bedrooms with a shared ensuite bathroom. Two Murphy beds, concealed behind cabinetry, provide unobtrusive sleeping space for additional guests.

Joan says homeowners should be aware of how much time is involved in custom designing and building a new home. Communication between clients and their builder is critical.

“The biggest thing is you can depend on them,” she says of Oke Woodsmith.

Glenn agrees. “They have the best trades in the business – there’s no question about it… The confidence in the relationship with the designer/builder is the most important of all.” 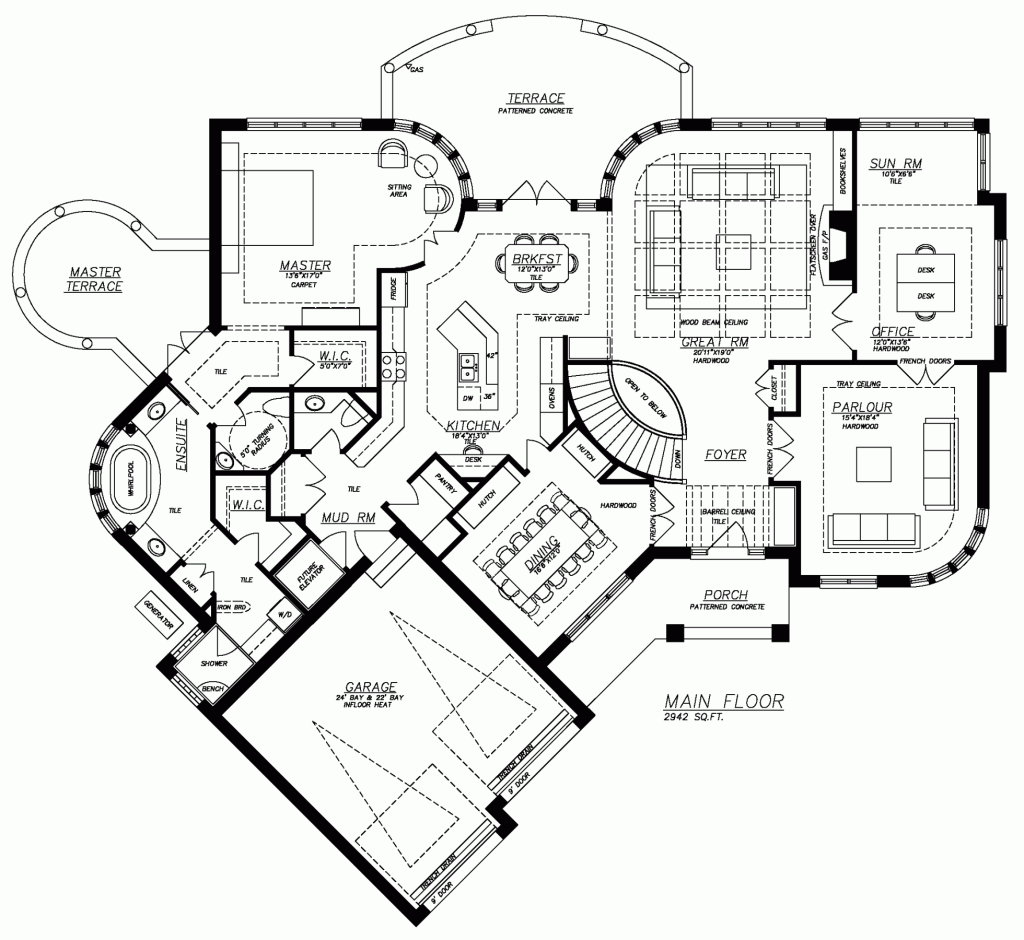 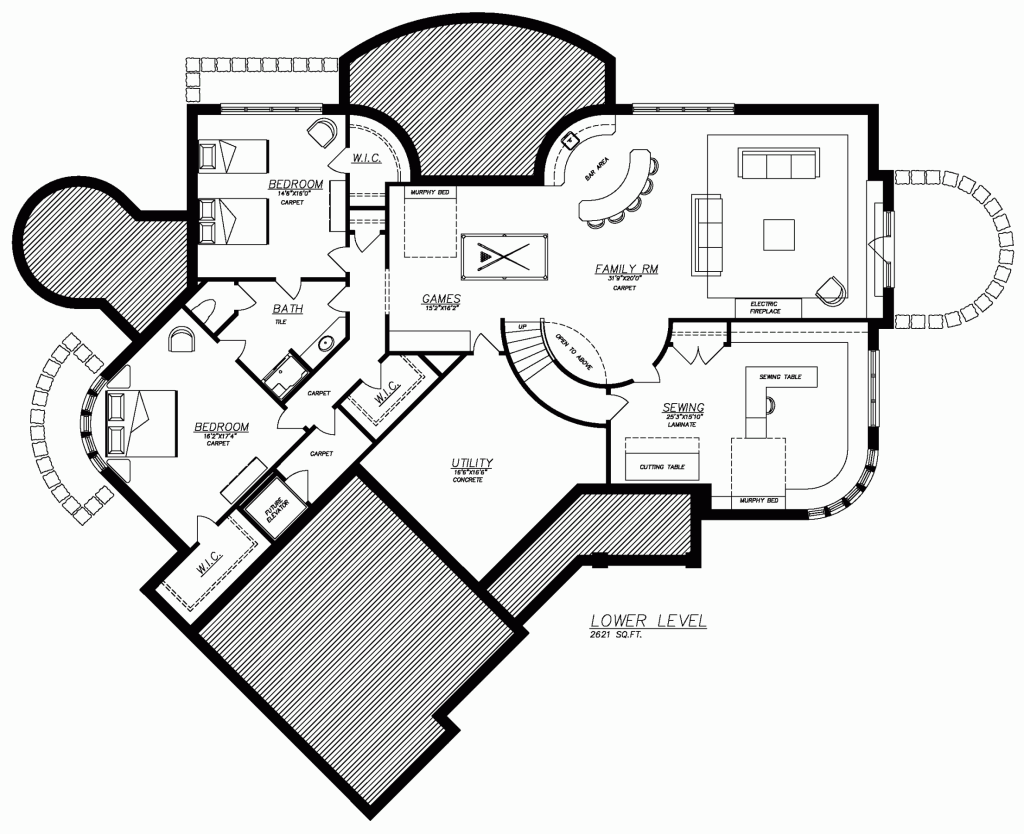 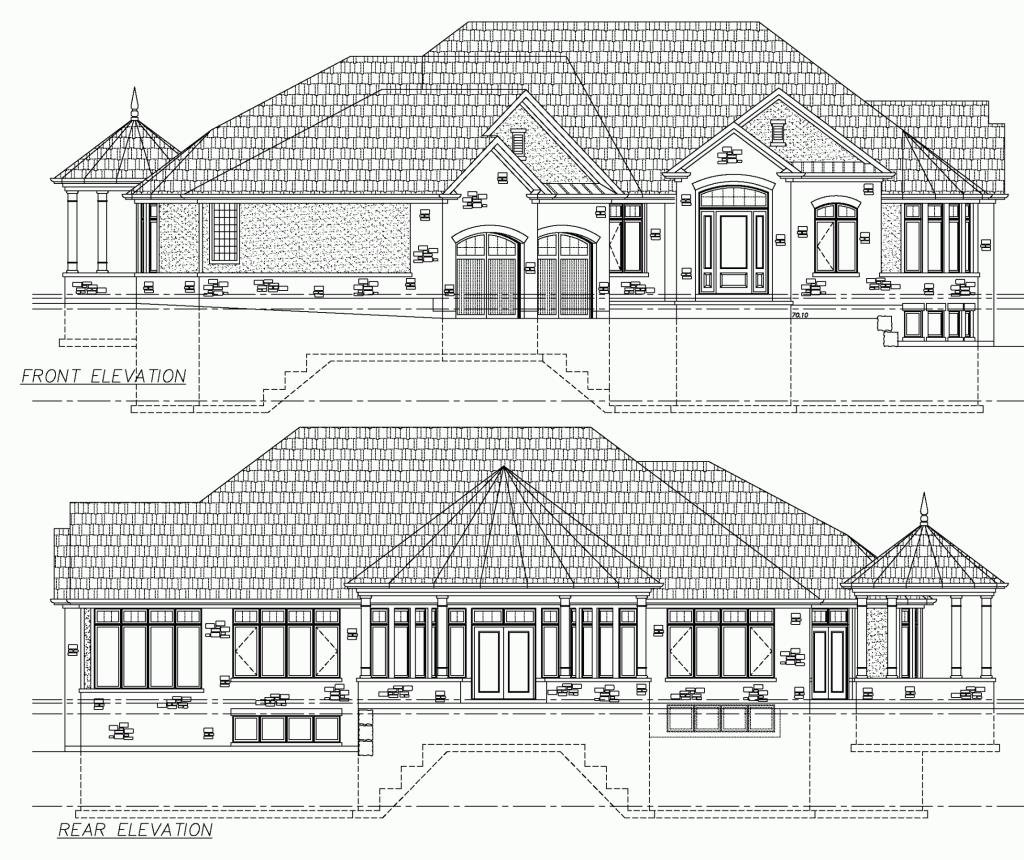