Maureen and Brandon thought they would renovate the 1958-built cottage Brandon and his sister Wendy inherited from their parents. It had been a family gathering place since the early 1970s.

“Brandon’s mom and dad bought this cottage with the idea family time was important to them,” says Maureen. “The original one pulled the family together to have great times and wonderful memories.”

However, the state of the cottage and restrictions on additions forced them to rethink. “The best plan for us was to tear the old structure down, which we did, and rebuild it with a new plan,” says Brandon. “Oke helped us with that.”

The couple knew Oke Woodsmith’s work in the Highlands 2 area north of Grand Bend. “We asked them to come to the site and tell us what was appropriate for restrictions the lakefront presented. Steve Poortinga and Randy Oke came out on site and looked at what we had and the size of the property,” says Brandon. “They said, ‘We can come up with a plan for you.’ That’s kind of how it started.”

To come up with that plan, the first step involved brainstorming a wish list. Both Maureen and Brandon admire Oke’s signature timber frame exterior accents. They also wanted a vaulted ceiling and a large stone fireplace. Full view of the lake was also important. “The old cottage had a very large picture window,” says Brandon. “My dad always called it the million-dollar view. To see that as you walk in the door, it opens up to the vaulted ceiling and to have that wall of windows – it was perfect for us.”

Steve incorporated all those details on the plan. “Usually you expect to go through three or four (drafts). We looked at the first drawing and it was perfect,” says Maureen. “It is so impressive working with Oke,” she says. “They were incredibly helpful. They work with you on every little decision. It didn’t matter what you asked them, they gave you their honest opinion. If you decided to go with their opinion that was fine. If you didn’t, that was okay too. They usually had the best ideas.”

The fireplace is a good example. Once the tough choice of stone was made, Oke suggested a reclaimed barn beam for the mantel. Maureen and Brandon weren’t convinced initially, and after it was installed, Maureen wanted to stain it. She listened to Oke’s recommendation to let it age naturally. Now it is Brandon’s favourite element. “It is just great. I sit and watch as the sunset comes across the stones and the colours change. I’m mesmerized by it. I love that feature.”

Maureen loves the floor, an engineered hardwood from Under Foot Inc. in London. “The floor was one of the hardest things to pick out. We wanted something that would withstand large nails of a dog and not be scratched.” They found a new durable product and took a couple of boxes to lay out in the space to see how it looked – and loved it. The flooring has become the wow factor, earning the most compliments from visitors.  “We wanted a little bit of contrast to the fairly stark white and stainless kitchen. It’s nice to have the rustic feel of the flooring throughout the whole area and the fireplace. It’s a nice balance,” she adds.

Maureen and Wendy chose the granite countertops at Progressive Countertop Strathroy. “We wanted the inside décor to reflect the sand, the blues, the greens of the water. We saw that granite and said, ‘That’s it.’ The waves in it look like ripples on the sand at the shoreline.”

Hearing those waves was a feature of the original cottage they wanted to replicate. Steve included a covered porch, a sunroom, a wall of windows in the great room and one bedroom, and French doors from the second bedroom to meet that wish. The sunroom windows slide up like shutters and it is their main dining area.

The two-bedroom cottage functions as a space bigger than its 1,500 square footage. Steve knew it was important to accommodate the extended family. The porch, sunroom and a den achieve that purpose within restrictions of the lakeside location. “The square footage, number of bedrooms and septic system capacity are part of the algorithm that determines the size of the footprint,” says Brandon.

The original cottage had an attached garage, allowing the new one to include more footage. The frontage allowed them to bring the new build slightly closer to the lake for lake sights and sounds.

Oke’s knowledge of the rules and regulations helped them make the most of available options. “I truly believe a London builder could never do this,” says Brandon. “Those guys (at Oke Woodsmith Building Systems) are genius. They have the trust of the township and regulatory folks.”

As an example of their integrity and service mindset, when the couple ordered the wrong sized sink, Oke corrected the problem with a new sink and countertop – free.

“It’s a relatively simple structure, but we feel like we were getting a custom home, the way they dealt with us,” says Brandon of Oke’s team.

“It was important to his parents to have a family gathering place,” says Maureen. “By rebuilding, we’re continuing that legacy. It was Important to all of us to continue it on behalf of his mom and dad. It’s a drawing place for family gatherings.” 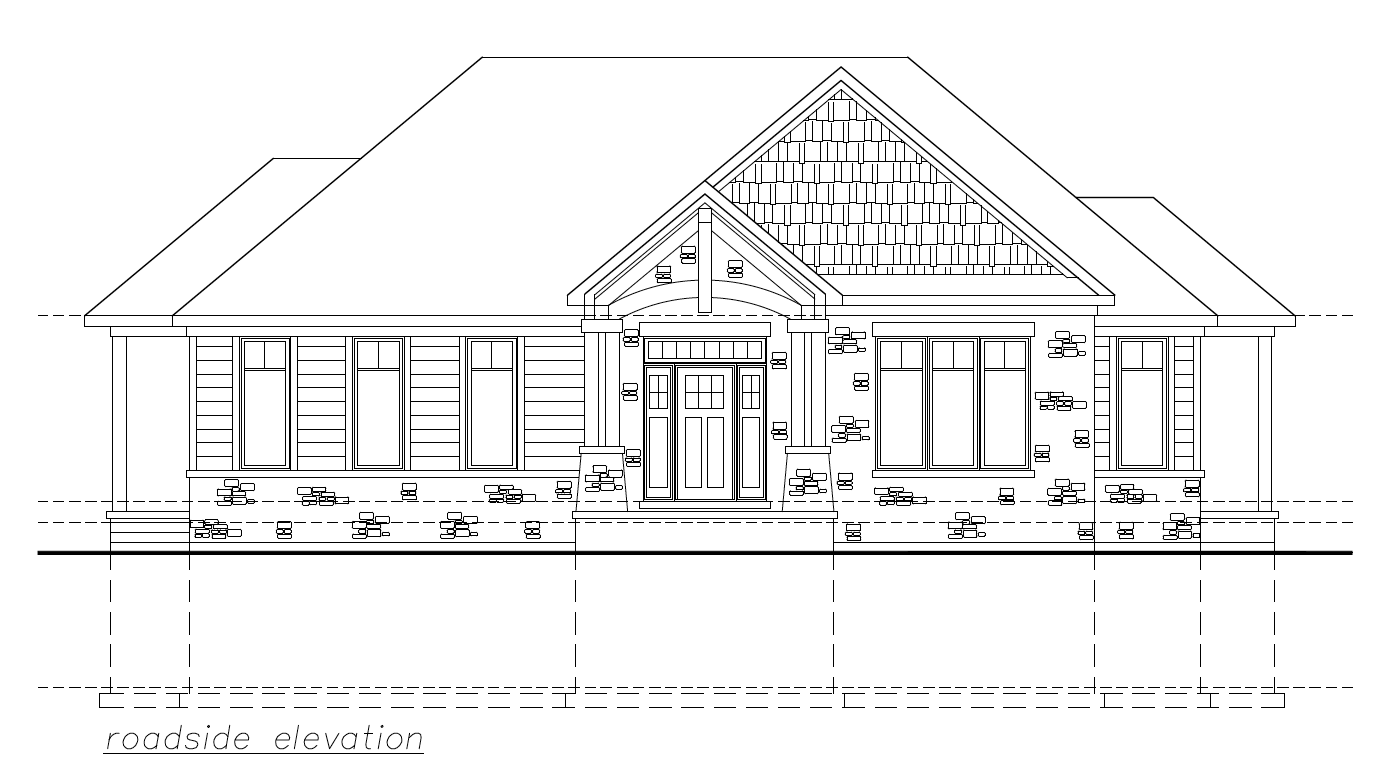 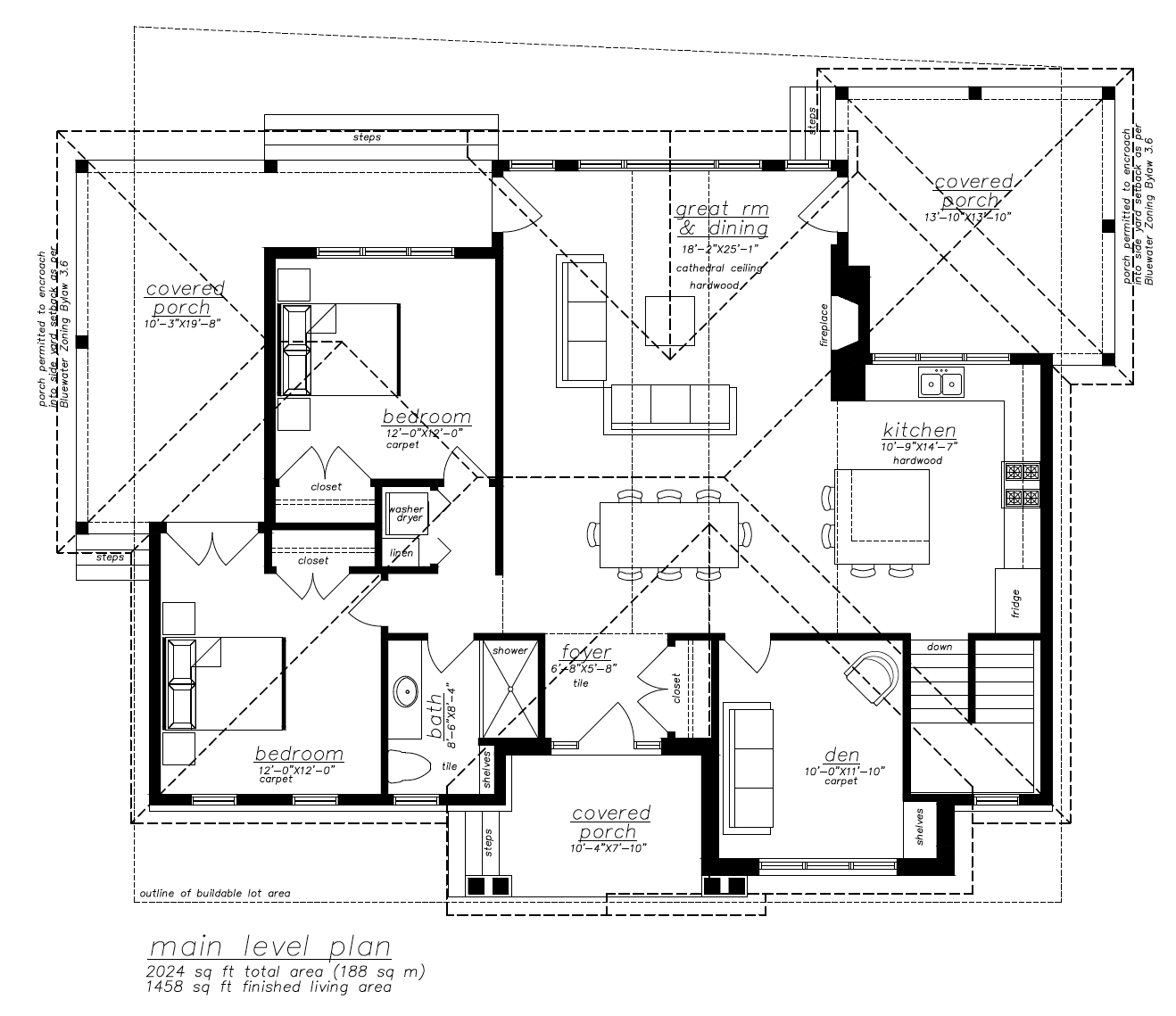