You are here: Home > Our Portfolio > Picture Perfect

Eric and Lisa Heinrich put so much thought into their new home north of Wiarton they were in no hurry to complete the planning stage and start construction. They particularly wanted to ensure the design did justice to its exceptional waterfront location near Georgian Bay.

While they gave painstaking consideration to the rooms and features they most wanted, their lack of experience in planning a new home made them second-guess some of their decisions. The couple worked with Brad Oke, an architectural technologist and a partner in Oke Woodsmith Building Systems of Hensall, for 2 ½ years before construction began.

“It was our first house, so we were just winging it,” Eric recalls. “We knew every room we wanted on each floor, so we made a scrapbook for Brad.”

The scrapbook included magazine clippings of features the Heinrichs admired, from rooflines and balconies to flooring and cabinetry. The couple, who have two young daughters, Alex and Sophie, particularly wanted a comfortable year-round residence that would reflect its cottage setting.

Oke drew a detailed plan after discussing the couple’s ideas with them. “Brad had done a lot of extra work for us without knowing if we were going to be committing to anything,” Lisa says. “He drew up a beautiful plan and we went from there.”

At one point, Eric and Lisa were ready to start building, but decided to defer construction for a year while they were expecting their first child, Alex, now 3. In the meantime, they continued to fine-tune their plans.

“They were really good to let us make changes,” Eric says.

Although the property was flat, Oke found he was able to position the home on a higher area of ground, which allowed him to create a lower-level walkout. He also built two separate two-bay garages stacked above and below one another. The lower bays are accessible from the rear where the driveway winds around by the side of the home.

“We built the equivalent of a four-bay garage in a two-bay footprint – that was kind of fun,” Oke says.

Eric and Lisa opted for a home constructed of Insulated Concrete Forms heated with radiant in-floor heating – a priority in a location exposed to high winds and extreme cold.

The couple moved into their 5,537-square-foot home in July 2005. The five-bedroom, six-bathroom home and property are valued at $2 million.

The exterior of the home resembles a one-floor plan, inspired by Craftsman design.

It features a combination of natural Owen Sound ledgerock, quarried in the Wiarton area, and cedar shingle siding, both chosen for their low-maintenance qualities. Two stone piers at the front entry anchor massive timber frame posts joined by an arch.

Copper rain chains hang from the corners of the eaves, giving the home a distinctly Asian appearance. The rain chains act as an alternative to downspouts by breaking the fall of the water and guiding it downward, preventing ice from forming in the eavestroughs.

Because the two-acre lot boasts 365 feet of waterfront property, Oke designed the home to capture views of the sunrise off the couple’s first- and second-floor rear decks, which face southeast.

A screened-in porch off the dining area at the side of the home, and an upper deck off the second-floor master bedroom, face northwest and catch the evening sun. “The deck upstairs is quite high, so it has a nice view and it takes advantage of every minute of the sun,” Eric says.

The home’s connection to its natural setting is evident right from the front door. Gleaming maple flooring, rich oak trim and soft caramel-green walls blend the colours of nature from the outdoors in.

A heavy oak door with an arched transom above opens into the front foyer, providing an all-encompassing view of the main-floor living areas. The two-storey great room is balanced, on the left, by the kitchen and dining area and, on the right, by Alex’s bedroom, her ensuite bathroom, and Eric’s luxurious home office.

Just beyond the foyer, a freestanding oak staircase with textured wrought-iron spindles curves dramatically up to the second floor and down to the lower level. It introduces the two-storey great room, which lies directly ahead.

A floor-to-ceiling feature window with an arched top forms a wall of glass that frames a view of Colpoys Bay and the rugged shoreline of the Bruce Peninsula just beyond. Sliding glass doors open out to an angled deck that overlooks the property as it slopes down to the shoreline. Surrounded by the deep blue waters of the bay, two islands – Cloud and Griffith – give the scene a picture-postcard quality.

The vaulted ceiling in the great room allowed for the creation of an arched niche above the window, drawing attention to the curving lines that form a recurring theme throughout the home. An immense stone fireplace, flanked on each side by built-in cherry cabinetry with fluted pilasters, reaches to the full height of the 22-foot ceiling.

A curved raised-ledge breakfast bar with a granite counter cleverly separates the kitchen from the great room and offers an unobstructed view of the bay while Eric and Lisa are preparing meals. Craftsman-style cherry cabinets are positioned on a rear wall behind the island on either side of a stainless steel range and hood. Designed by Lloyd Vandenberg of Wood Decor in Stratford, the cabinets feature deep crown mouldings and recessed-panel doors.

The angles of the tray ceiling in the kitchen and dining area are repeated in a second island, which also functions as a casual eating area. It distinguishes the kitchen’s workspace from the dining area, which overlooks birch, pine, spruce and cedar trees on three sides of the room.

Behind the kitchen, a small hallway leads to Sophie’s bedroom and her ensuite bathroom, as well as a powder room. Another hall leads connects a second entry at the front of the home with a mudroom, a laundry area and a walk-in pantry off the kitchen.

The second floor comprises a 914-square-foot master bedroom retreat that’s decorated in shades of tan and caramel. A three-sided gas fireplace divides a cosy area for viewing television from the bedroom, which features an angled tray ceiling and a stunning view of the bay through a wall of windows.

The adjoining ensuite bathroom is illuminated by light from two skylights, which gives the yellow and peach tones in the marble floors a soft glow. The bathroom incorporates a corner bathtub surrounded by casement windows, a glassed shower with marble tile floors and two vanities, one of which conceals a laundry chute.

From the foyer, the oak staircase leads past a curved wall to the lower level walkout. Designed as a guest retreat with a separate entrance, it features a sunken family room with a stone fireplace, a raised bar area with a games room, as well as an exercise room and a bathroom with a sauna. To the right of the family room are two guest bedrooms, one of which features a rounded sitting area, and a full bathroom behind pocket doors.

Eric says he and Lisa are glad they took their time planning their home. He believes it’s particularly important to seek good advice when building in a resort area where homes should reflect elements from their natural setting.

“We’ve seen houses being constructed even on the water here that have small windows that just don’t take advantage of the views,” Eric says. “We feel we did that quite well.”

Although the Heinrichs haven’t lived in their home for very long, they have high expectations of it. “It’s going to suit our lifestyle quite well because of the space and the design,” Eric says. 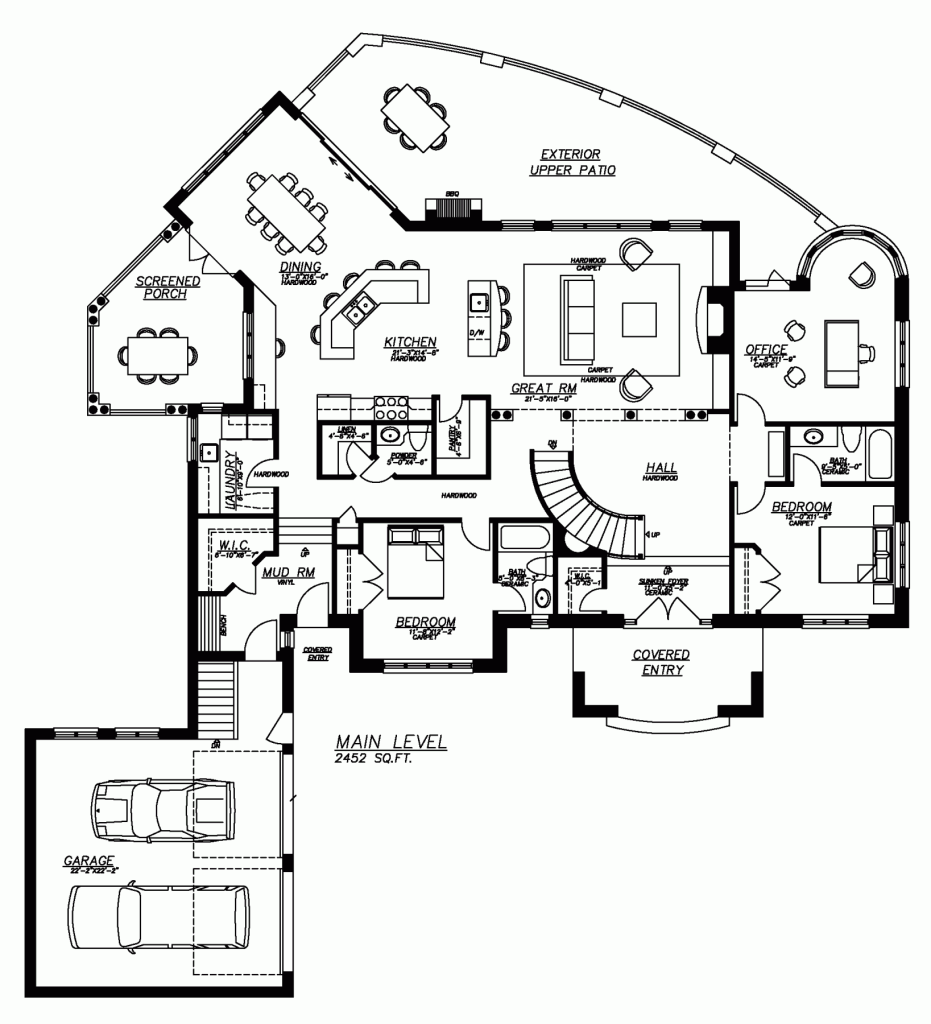 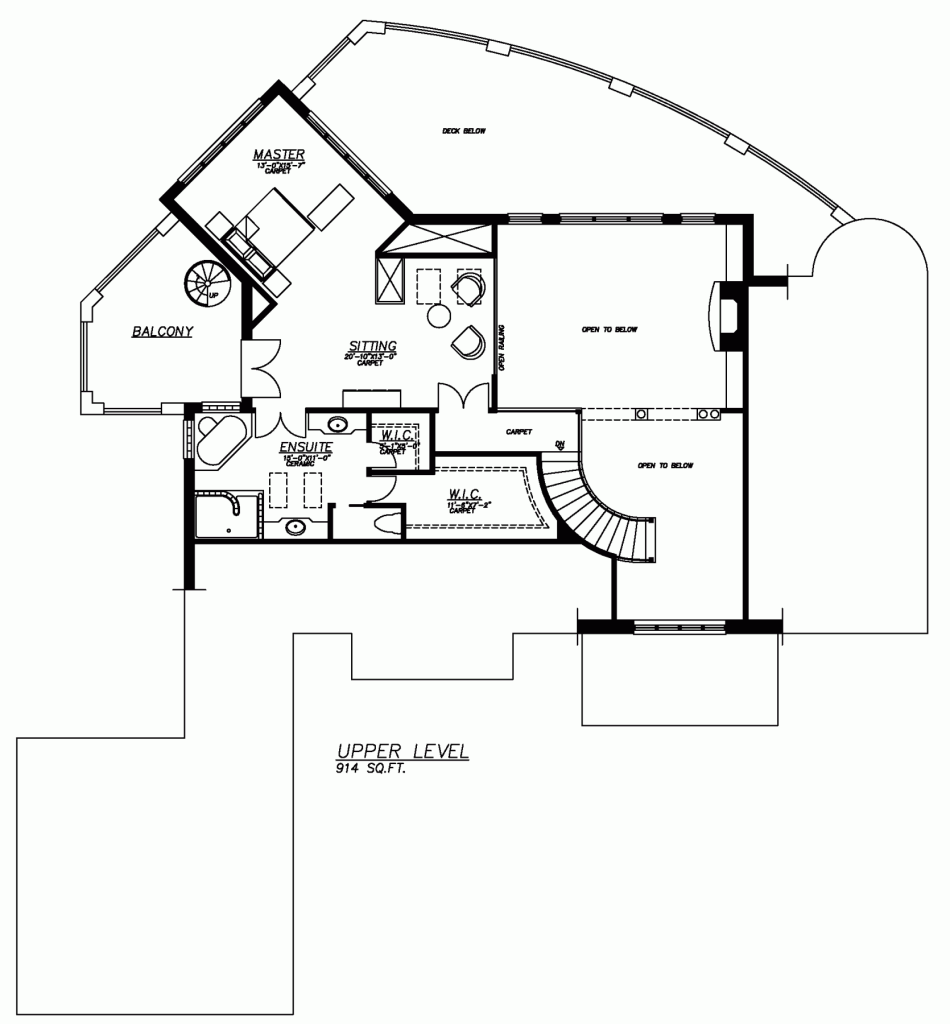 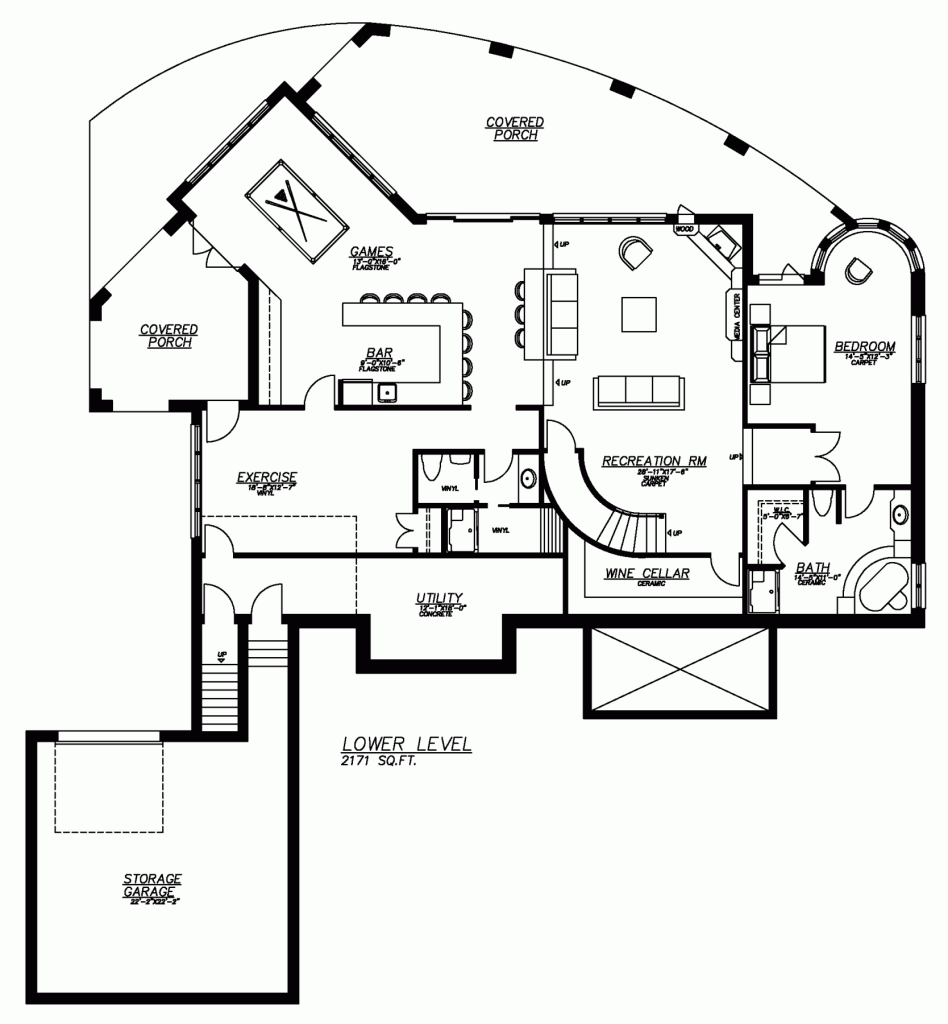 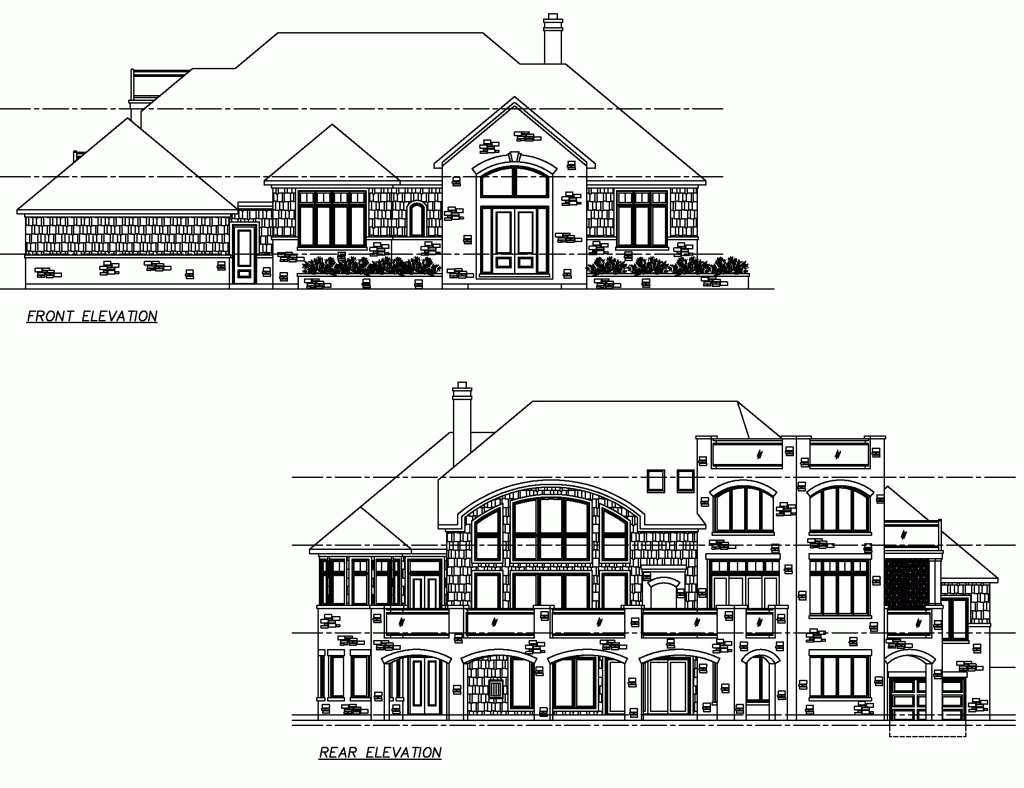 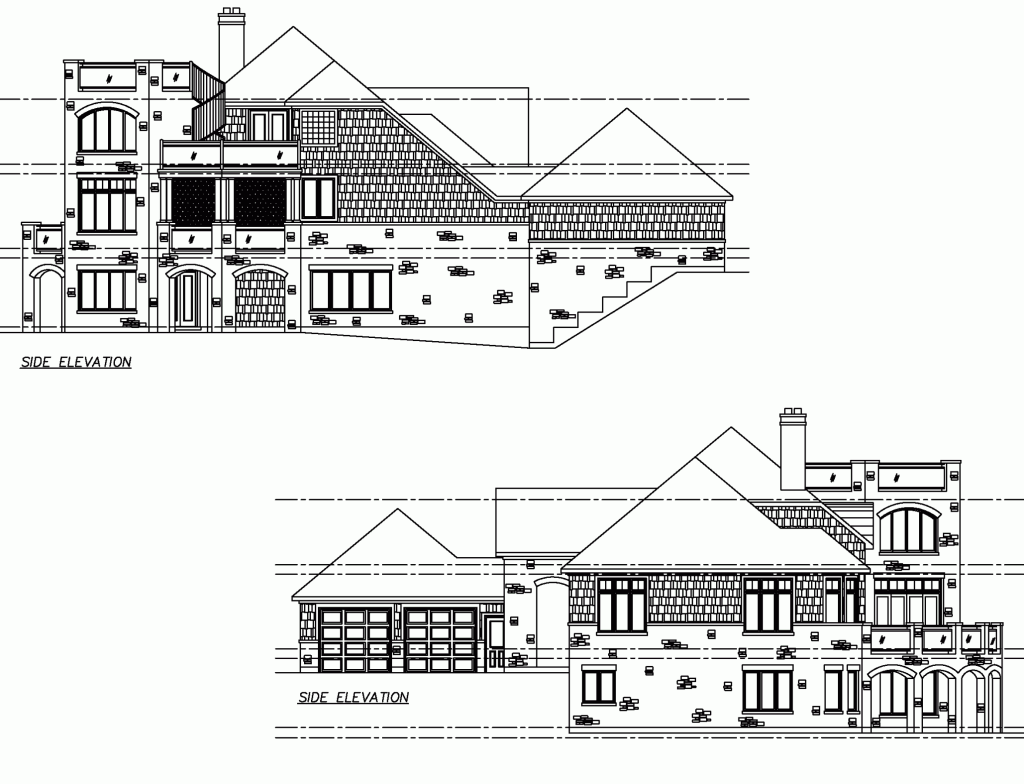