You are here: Home > Our Portfolio > Beach House Beauty

Lakefront properties are few and far between – particularly along the Lake Huron shoreline. It’s no wonder, then, that Rick and Marlene Mazur leaped at the opportunity to purchase land that not only embraced views of the lake, but also of the Ausable River.

The couple, who live in Cochrane, Alberta, have strong ties to Port Franks: Rick has fond memories of spending summers there as a teen and Marlene was raised in nearby Parkhill. The Mazurs purchased their property in Port Franks in 2000 and contracted Brad Oke, of Oke Woodsmith Building Systems, to design and build their home. Extensive travels throughout Cape Cod instilled in them a fondness for beach houses.

“I think I’ve always liked the New England states and the style there,” Marlene says.

Oke designed the home for privacy, which was a challenge on a relatively small lot in a subdivision. He situated the functional areas – the elevator, pantry, laundry room, two-piece bathroom and a walk-in closet – at the front of the home. A hallway separates those rooms from the main living area, which faces the lake and stretches the full width of the home. It incorporates a master bedroom retreat, a two-storey great room and a kitchen-dining area.

“That was a big thing – trying to get every room to have a view of the lake,” Oke says.

Marlene was particularly concerned about maintaining the authenticity of the architecture and debated the fine points of the design with Oke. In the spirit of Cape Cod, she and Rick opted for a maintenance-free railing system, manufactured in the U.S., that resembled wood and incorporated straight spindles. Although it would have been easier to choose tempered glass railings, it wasn’t a compromise they were prepared to make.

They also chose tan-coloured shingles made by James Hardie, a manufacturer of fibre cement cladding, and paired them with Arriscraft stone. In addition to being stylish, the cladding resists harsh weather conditions on the lake. The home’s construction of Insulated Concrete Forms also eliminates drafts and deadens sound.

Inside, Marlene’s goal was to work around a classic nautical theme. She’s partial to dark wood and chose African sapele for the engineered flooring that was installed over the radiant in-floor heating system that heats all three levels of the home. The richness of the floors was also a good match for the cherry staircase and cherry woodwork in Rick’s office on the second floor.

Simulated divided light windows were another of Marlene’s priorities. They provide additional detail in keeping with the finishes throughout the home, from the finely wrought plaster mouldings in the upper hallway and the great room to the hand-carved cherry corbels in the kitchen.

While Marlene was responsible for many of the decisions, Rick had several requirements of his own. “I wanted a big office, but I wanted to see the lake, the river and landscape,” he recalls. “And privacy was a big thing, too.”

The couple took their retirement years into consideration and decided to locate the master bedroom retreat on the main floor. They also added an elevator to help them access all levels of the home as they age.

Designing the home took about two years, mainly because of the cross-country distance involved. Once construction began in December 2005, Marlene visited the site monthly to oversee the process and source items for the interior. The couple moved into the home in June 2007.

Oke describes the exterior of the home as a “refined cottage with a Hamptons-type look.”  The rear elevation is particularly stately with a covered porch and upper sun deck that curve along the width of the home, connected at each end by rounded turrets. Wide steps lead up from the ground level to the porch, which is supported by round columns.

Because Rick and Marlene requested a walkout to the lake, Oke elevated the main floor and positioned the garage underneath to compensate for the narrowness of the lot. The lines of the porch and sun deck visually detract from the height of the home, causing the eye to be drawn laterally instead of vertically.

One year after the completion of the home, the Mazurs say they particularly appreciate their views of the lake and its changing character. With the home situated at the mouth of the harbour, it’s an everyday occurrence to see boats pass by; it was the view, in fact, that sold Rick on the property.

Marlene is particularly partial to the main-floor rooms. “They’re bright, they’re comfortable, I feel at home,” she notes.

The front foyer offers a spectacular view of the great room. Furnished in shades of ivory and blue, the room features a wall of cabinetry built around a gas fireplace with a marble surround and hearth. Three art niches above display an exotic Indian rug flanked by two enormous urns – one from Italy and the other from Mexico.

A bank of french doors opens to embrace the outdoors, evocative of homes in the Caribbean. Motorized screens descend from the ceiling of the porch, effectively excluding insects.

“On a nice day, everybody can be outside,” Marlene says. “The outdoors are just as important as the indoors.”

To the right of the great room, the curve of a Juliet balcony off Rick’s second-floor office is repeated below in a peninsula that separates the living area from the kitchen. The contrast between light and dark themes is particularly evident in the kitchen where great expanses of dark wood flooring provide a backdrop for traditional white cabinets, positioned along a rear wall, and a beadboard backsplash.

A large cherry island, finished with corbels and fluted pilasters, creates a transition between the workspace and a casual dining area. Tucked into a turret, the dining area offers a 180-degree view of the lake through a rounded wall of casement windows.

To the left of the great room, double doors open in to the master bedroom retreat. Decorated in shades of sea foam green and ivory, the bedroom features a window seat that curves along one wall. Rounded bulkheads above create a decorative effect, although their actual purpose is to conceal the ductwork for the air-conditioning system.

“It gives it a little bit of interest versus just a flat ceiling,” Oke says.

The ensuite bathroom off the bedroom combines shades of sand in the tumbled marble floors and muted colour scheme. Off-white vanities and caramel-coloured marble counters accentuate the sense of restrained luxury, which is reinforced by a glass block window that curves around a soaker tub, as well as a glassed shower.

A cherry staircase with white spindles sweeps up to the second floor, which is comprised of two guest bedrooms – each with an ensuite bathroom – as well as Marlene’s sewing and crafts room, a main bathroom and Rick’s office. The upper hallway is particularly dramatic: it overlooks the great room and is level with three arched windows that fill the area with light.

From the main floor, the staircase spirals down to the lower-level walkout. It features a sunken home theatre room with a games area and a bar, a bathroom and an exercise room with a raised hot tub.

Behind the bar, a brick-lined passageway illuminated with flickering sconce lighting opens in to a wine cellar where racks of wine bottles are concealed behind glass doors. A ceramic tile floor and a faux finish on the walls and ceiling create an enigmatic ambiance reminiscent of a grotto.

Oke first saw a similar wine cellar in Dallas, Texas 10 years ago and suggested it to the Mazurs. Although Rick enjoys wine, he maintains he isn’t a connoisseur.

Rick and Marlene believe it’s critical for homeowners to choose a builder with whom they can communicate and share ideas. Rick says the entire Oke Woodsmith team made building the home a worthwhile experience.

“I like Brad, I liked his tradespeople. The three different foremen would always listen and work toward what we needed. They did a good job of trying to fulfill what we wanted. Their contractors were all fine people to work with,” Rick observes. “We always knew they were building for us.”

Marlene says it’s important for buyers to tour a builder’s homes. They should also be aware of their own preferences.

“Know what you want and stick to it,” she advises. 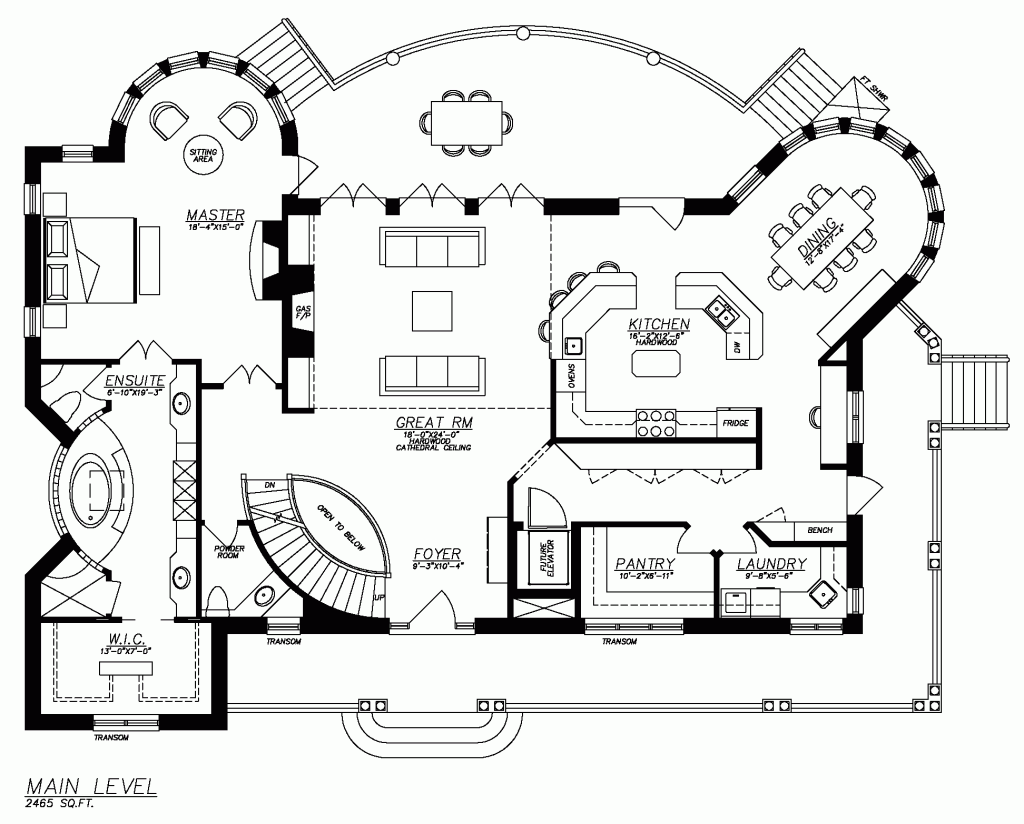 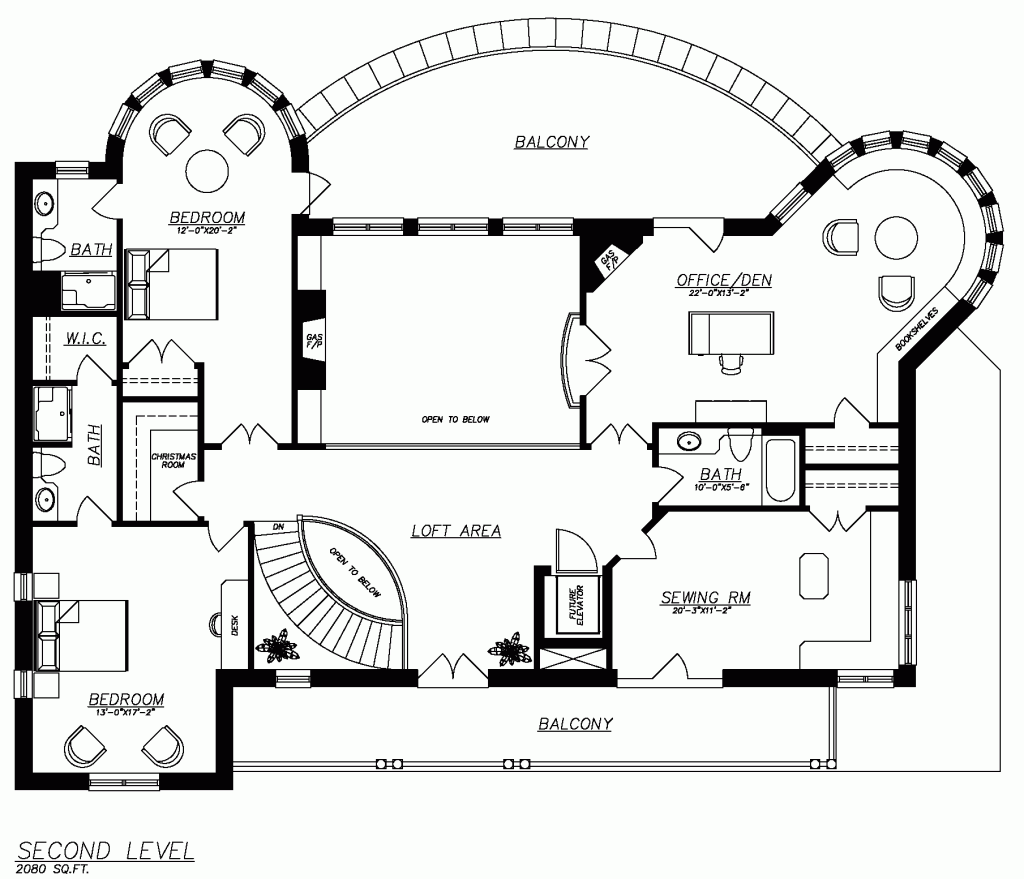 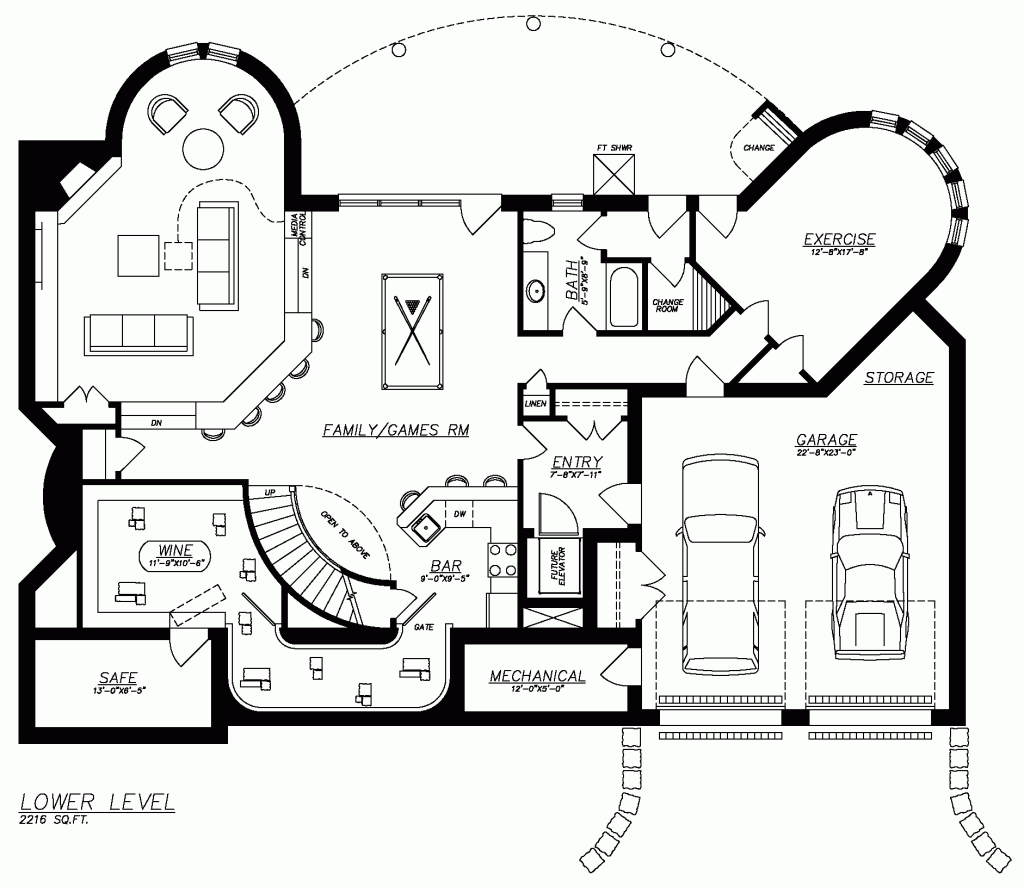 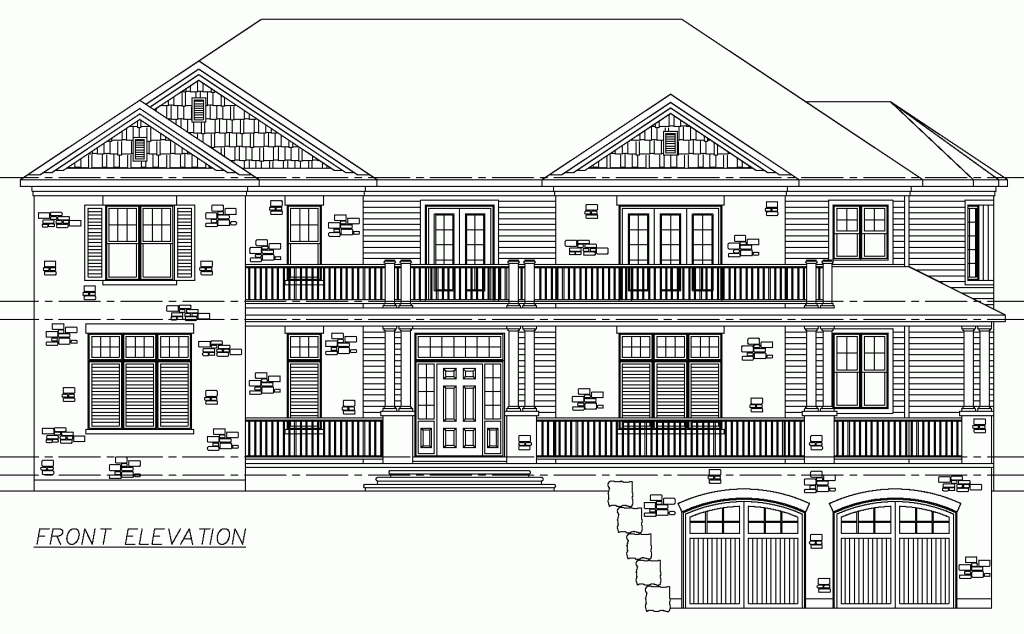 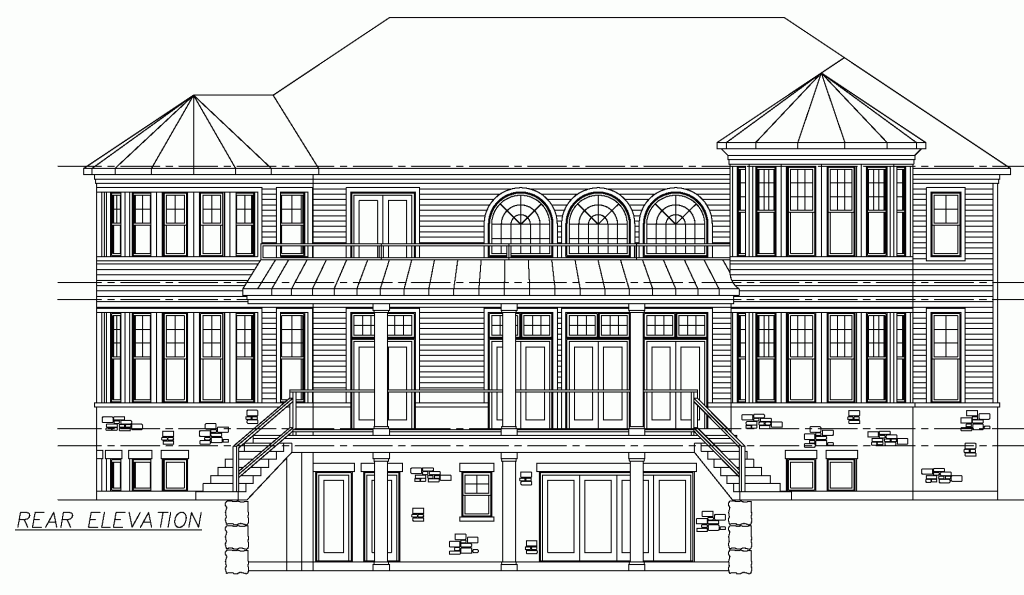 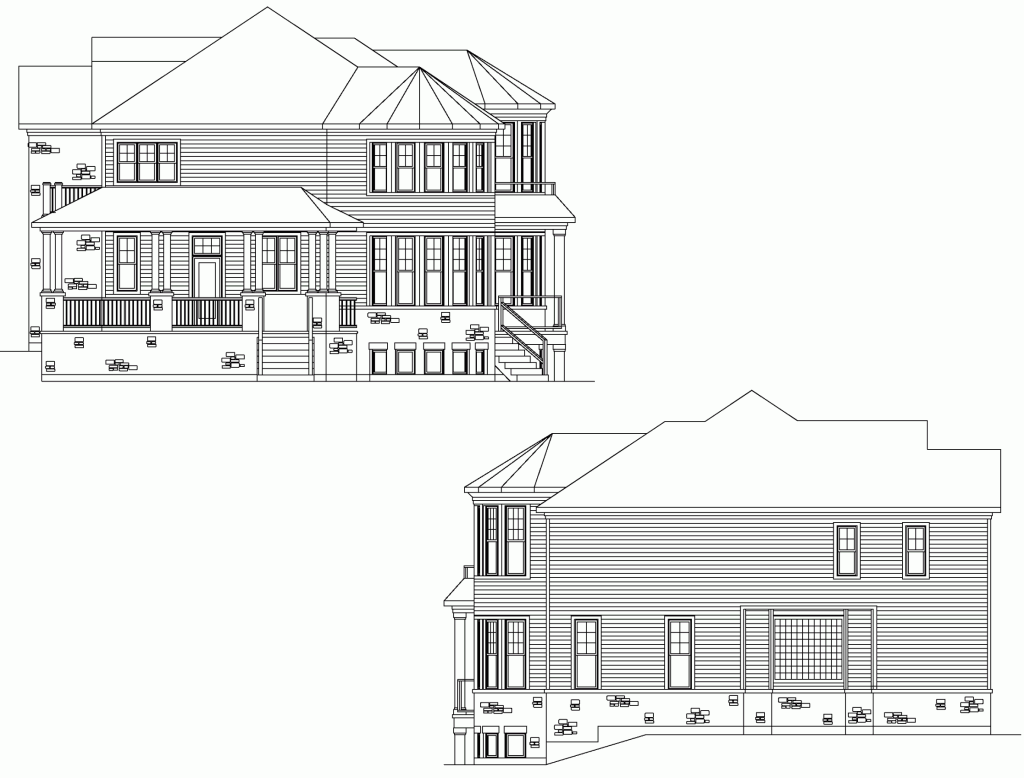