You are here: Home > Our Portfolio > Northern Reflections

Copper, granite and cherry finishes connect this Port Elgin home to its natural setting.Judy and Terry Bicknell are accustomed to living in homes that are out of the ordinary. Their new residence in Port Elgin, north of Kincardine, is no exception.

The one-floor home, which backs onto a wooded area, was inspired by the natural elements. Chilton stone from Wisconsin in shades of plum, green, sand and blue anchors the exterior, which is accented by arches of reclaimed brick.

Copper details – from three Canada geese attached to a cupola above the garage to copper eaves troughs and copper rain chains – reflect the couple’s love of unusual materials.

“From day one, we wanted something unique,” says Judy Bicknell. “We feel our last house was unique.”

The semi-retired couple moved to Port Elgin from Thunder Bay five years ago to be closer to their daughter and her family. As their daughter’s family expanded, the Bicknells decided to purchase a lot and downsize to a smaller house, allowing their family to move into their home.

The Bicknells first learned of Oke Woodsmith after reading a magazine article about a home the company had built in Grand Bend. When they were visiting friends in the area, they contacted Oke Woodsmith and met with them the same day.

They were attracted to their experience in designing and building homes on problematic lots, particularly since the lot they had purchased overlooked a ravine. In the past, gravel had been removed to make way for a railway line behind the property which caused the grade to slope steeply upward from the street.

“Oke Woodsmith saw this as a real challenge,” Terry says. Because the Bicknells didn’t want an elevated driveway, Oke reduced the grade and was able to incorporate a lower-level walkout.

“The side lot setbacks created some challenges because of the stability of that size slope,” Oke recalls. “We ended up doing slope stability tests to prove that we could go into that area. It actually turned out to be very successful because it allowed us to have a walkout from the lower level that looked into the old railway path, which is now a walking path.”

For the exterior of the home, the Bicknells preferred a hard stone that would retain its colour. Oke escorted them to quarries in Wisconsin where they found the Chilton stone they ultimately selected. Unlike Wiarton stone used in the area, the colour won’t fade as it ages.

As the six-month design process evolved, the couple decided to give Oke free rein in exploring different ideas. Building the home using Insulated Concrete Forms allowed for the creation of curved walls in key areas of the home, in addition to eliminating drafts and deadening sound.

Construction of the 2,529-square-foot home began in April 2008 and was completed shortly before the couple moved in one year later.

“I don’t think you’d find a contractor more creative and willing to please you,” Terry says. “They would state their views – that was the great thing about them. Lots of times, we changed our views.”

Inside, the couple particularly wanted a separate dining room, a main-floor office and a casual eating area in the kitchen. They decided to dispense with a formal living room and opted for a great room instead. Kevin Oke, a finish carpenter, created detailed wooden columns, spanned by an arch, to delineate individual living areas within the open-concept floorplan.

“By having those pillars, it defines the area and provides some separation,” Judy says.

A heavy African mahogany door, framed by bevelled glass sidelights, opens in to a foyer that features an arched copper ceiling. The office, to the right, is furnished with a curved desk that follows the lines of the tray ceiling above. A rounded wall faced with narrow casement windows captures views of the maple and oak trees in the ravine below.

To the left of the foyer, off-white paneling creates an introduction to the dining room, which is furnished with a traditional oak dining suite. The couple decided to incorporate swinging panelled doors to separate the dining room from their kitchen.

“When our grandchildren are running through, it’s a nice feature,” Judy says.

Beyond a hallway that leads to a two-piece bathroom, the great room embodies a summer ambiance. Detailed ivory coffered ceilings are paired with soft blue-green walls and traditional furnishings that underscore the home’s theme of comfortable living.

A curving wall of windows at the rear of the great room offers a view of a covered porch, a patio and woods beyond. Berms landscaped with evergreens and woodland plants blur the boundary between natural and landscaped areas.

“I’m really pleased with the feel of the great room – it’s very, very cosy. I love the view from every window,” Judy says.

An archway connects the great room and the kitchen-dinette, which features beautiful natural materials. A large cherry island, finished with French country posts and a raised ledge of silvery black granite, separates the workspace from a wet bar and the casual dining area.

One of the home’s strengths is its ability to incorporate hidden and unexpected rooms. A round sitting room off the kitchen opens in to a vestibule that leads to the master bedroom.

The sitting room and the bedroom share a two-sided gas fireplace, as well as views of a waterfall that gently spills over ledgerock.

The ensuite bathroom to the left of the vestibule features a double cherry vanity topped with a granite counter that incorporates shades of blue, caramel and bronze. A door separates the ensuite from a two-piece bathroom that’s accessible from a secondary hallway. The hallway connects the kitchen to the storage areas, the laundry room and an elevator that makes the entire home accessible.

Like the main floor, the lower level is bright and open, which makes it ideal for entertaining family members. Terry says he likes the change in ambiance between the traditional main floor and the more casual lower level.

“I’m looking forward, when the snow is here, to turning on the fireplace and watching the hockey game,” he says.

A spacious entertaining room features a stone fireplace, an oak bar with an adjacent dining area and a billiards room. One special element – a wine cellar – was designed with flickering sconce lighting and walls appropriately finished with a combination of stone and reclaimed brick.

Judy says homeowners should be open-minded about considering new design features. She particularly enjoys the curved walls and the round sitting room, which she and Terry incorporated because of Oke’s recommendations.

“We have ended up with some very unique things in our home we love,” she notes.

Terry agrees. “Our home is unique and that’s what we wanted and they achieved that.” 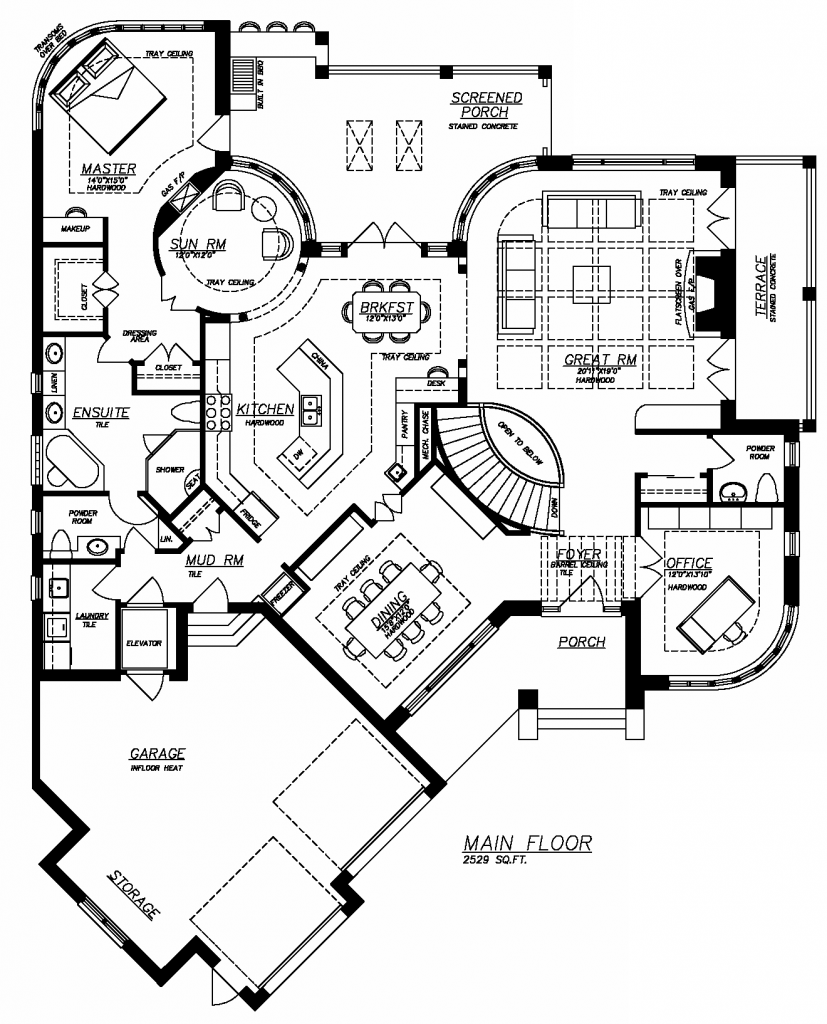 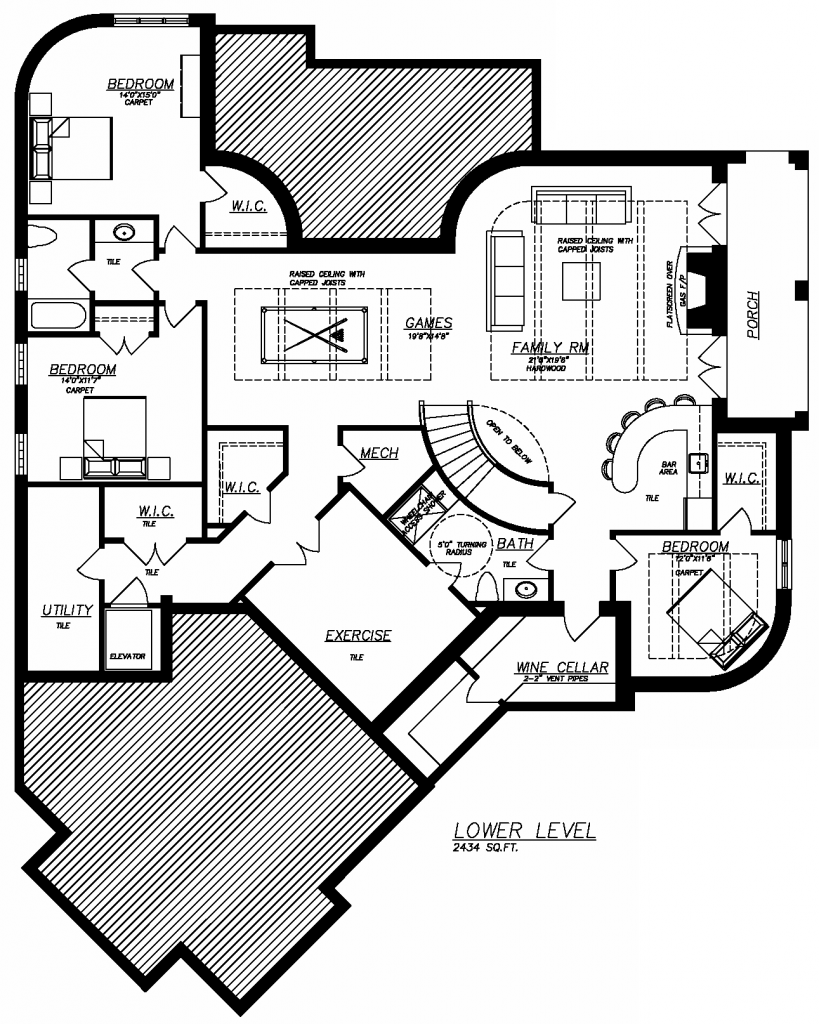 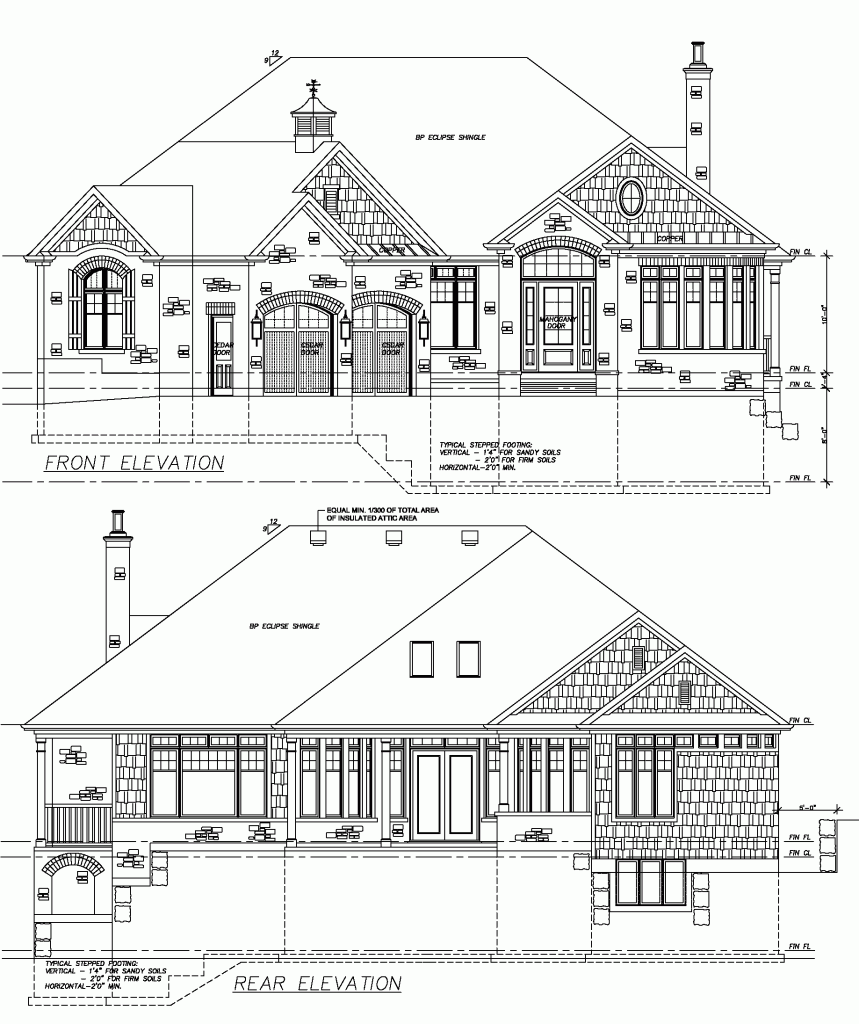 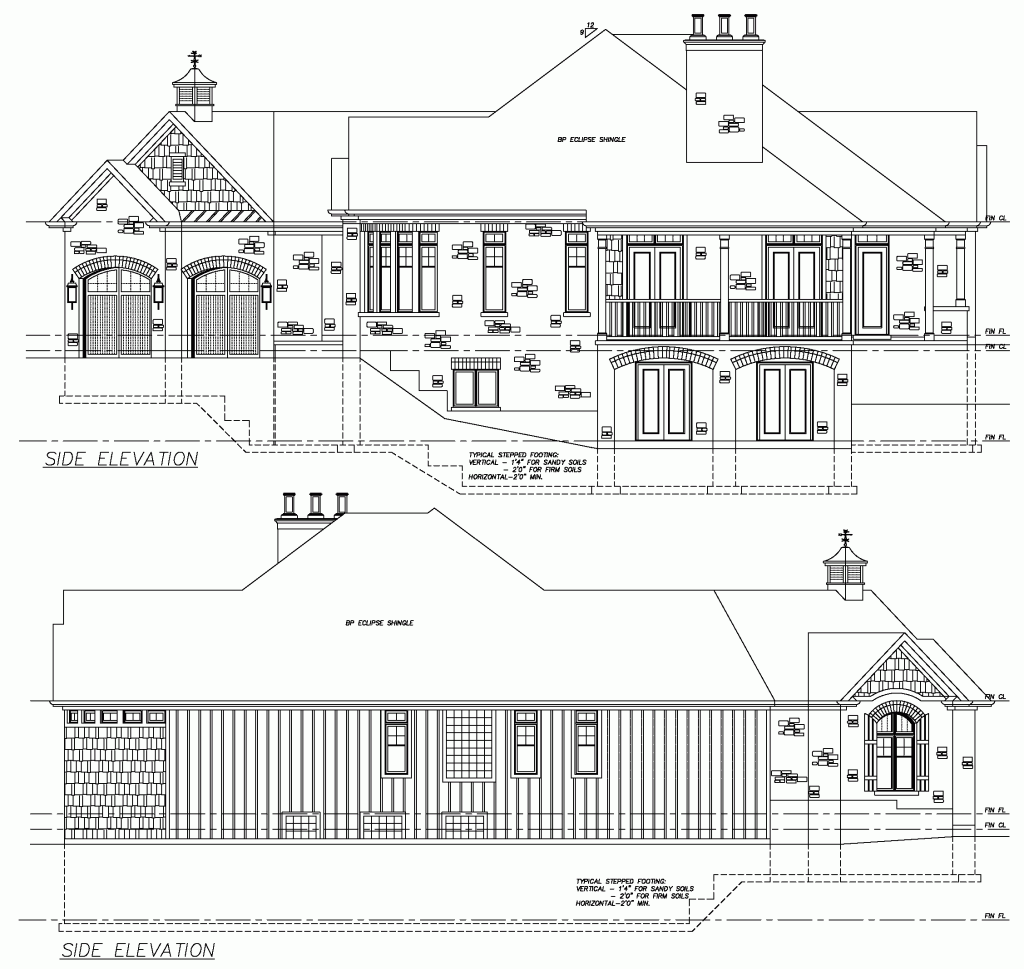