You are here: Home > Our History 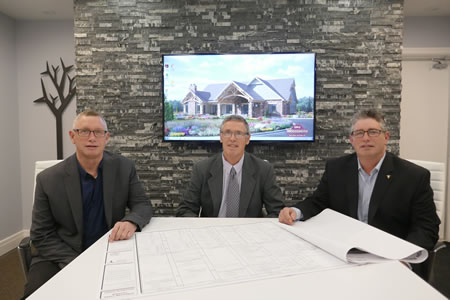 Oke Woodsmith Building Systems was launched in 1984 with just one client and a tremendous vision. In the years since then, the Grand Bend-based company has built and renovated 600 distinctive custom homes from Muskoka to Rondeau Provincial Park for clients who have come to expect the unusual.

Oke Woodsmith Building Systems was launched in 1984 with just one client and a tremendous vision. In the years since then, the Grand Bend-based company has built and renovated 600 distinctive custom homes from Muskoka to Rondeau Provincial Park for clients who have come to expect the unusual.

The idea for the company came about in 1983 when the four Oke brothers – Brad, Wayne, Randy and Kevin – reunited with their parents for Christmas. At that point, Brad, an architectural technologist, was employed by Bell Canada in Saudi Arabia and Wayne was working in Alberta.

Over Christmas dinner, Randy, Wayne, Kevin and their father, Don, made a decision to help build a home for Brad in Southcott Pines in Grand Bend. Wayne volunteered to quit his job in Alberta to work on the project,  Kevin quit his job as a welder in the agricultural sector, and Don decided to resign from his management position. Many years before, Don had owned his own construction company.

With just one client, Oke Woodsmith was born. It was a courageous move, given the recession of 1981.

Success followed quickly. Don, a well-respected builder in the area, brought 33 years of experience to the company. As an equal partner, he priced the homes and ensured his sons correctly estimated the time needed for each stage of construction.

After completing Brad’s house, the partners landed a contract for a $1-million home in Grand Bend, which raised their profile in the area.

Randy and Brad worked for the company on evenings and weekends until the business grew. Brad, who was still working for Bell in Saudi Arabia, was the last brother to join full-time in 1986. Their mother, Betty, became general manager in 1990.

One of the company’s key roles centred on selling the homes, which involved providing architectural drawings to clients based on their ideas, budget and property. That was a new concept in an area where clients normally chose a stock plan and contracted a builder to construct it.

Initially there was no charge for the drawings, which included three revisions and pricing. If clients weren’t happy with the results, they weren’t obligated to work with the company. The concept was successful for nine out of 10 people where a budget and a design were created to their liking.

The five partners undertook all aspects of the construction work, from roofing to drywalling the homes. Randy believes that was a benefit.

“It’s very satisfying when you start a job from the ground up and finish it. Any one of us could build a house from start to finish and lay the carpet, lay the tile, lay the hardwood – finish it completely.”

Along with building conventionally framed homes, the company, in 1987, began building foundations and, later, above-grade exterior walls with Insulated Concrete Forms (ICF). The partners believed they were headed in the right direction because of the improved energy efficiency and sound resistance of concrete.

Home buyers, however, were skeptical until the company began incorporating concrete floors with in-floor radiant heat into the design. Visitors to two of the company’s model homes in Grand Bend came specifically on cold days to experience the warm floors.

“Concrete floors are warmer and the colder it is outside, the better they are inside,” Randy says.

At that point, clients began to appreciate the floors and recognized the value of building exterior walls of concrete to the eaves because of the added comfort and energy savings.

Oke Woodsmith has since become one of the leading builders of ICF homes in Canada and is also the distributor throughout Ontario and Quebec for Lite-Form, an ICF building system. The company sells the systems to builders and to private individuals throughout Ontario.

Over the years, the partners’ roles in the company have changed. Randy is now responsible for the design and sales of the homes and is also the general manager of the Oke Woodsmith office and manager of Lite-Form. Wayne acts as construction supervisor and Kevin, a finish carpenter, looks after the drywalling and fine details. Don has since passed away, Betty has retired and Brad has left the company.

Altogether, 30 to 45 staff members comprise Oke Woodsmith, including a team that is responsible for the company’s framing, trimming and concrete work. Employing in-house staff instead of subtrades ensures consistency in each home from the time a site is excavated to the time a client moves into a home.

The company builds about 20 new homes and undertakes up to 10 renovation projects annually. The partners have also designed and built many commercial projects, including a fire hall east of Toronto, as well as office complexes and agricultural buildings in Huron County.

Oke Woodsmith is currently building homes along the Lake Huron shoreline from Sarnia to Kincardine. The company specializes in the unusual, which attracts clients from young professional couples to empty nesters.

While the company will always be a custom home designer and builder, the partners are turning their attention to the aging population, as well. One project, Stone Meadows, a one-floor condo community in Zurich, is geared toward retirees. The development is one of the first of its kind in Huron County and a first for Oke Woodsmith. The company’s aim is to provide the qualities it offers in a custom home, but in a smaller square footage and a more economical package.

Randy hopes to create other similar communities as the company evolves. He believes Oke Woodsmith’s future will be in the Oke children who, like their parents, will join the company after working farther afield.

“I’m hoping our growth is in family members – our kids – joining the team,” Randy says. “That’s where you get genuine interest in the company and the ability to expand it.”