You are here: Home > Our Portfolio > New & Improved
An updated floor plan completely revamps a 45-year-old homeMany homeowners ponder the age-old question of whether to renovate or move when their children leave home and their lifestyle begin to change.

For one couple in Exeter, an innovative renovation achieved many of the features of a new home while allowing them to remain in the neighbourhood they loved.

The couple’s two-storey, four-bedroom home was too large to suit their needs once their three daughters left home. A series of small rooms with defined functions meant that when they entertained, different groups gathered in different rooms.

“We couldn’t pull it all together and interact with everyone,” the owner recalls. “We also ended up with a lot of people standing – we didn’t have the room to sit.”

Because they were using only a portion of the home, the couple gave serious thought to building a smaller ranch-style house with an open-concept design. They particularly wanted better traffic flow for entertaining and an office where the owner’s wife could work.

The couple contacted Oke Woodsmith, who suggested a new home might not be necessary. Moving would have meant exchanging their 100-foot lot frontage, and their view of a beautiful ash forest, for a smaller property in another part of town.

The couple toured homes Oke Woodsmith had built and renovated, which helped them to envision the possibilities. They also showed them how their existing floorplan could be reworked.

“What to me seemed so challenging, they made so easy,” the owner says.

In a three-month renovation that was completed in November 2008, they reconfigured the couple’s main floor. The company transformed the living room at the front of the home into an office with built-in cherry cabinetry. Off a secondary hallway, a small office became a laundry room, an existing two-piece bathroom was outfitted with new fixtures, and a new mudroom area was created.

At the rear of the home, the kitchen and dining rooms were reversed and walls were removed to open up the space. The great room, created from the former family room, became wider with the elimination of a hallway. Larger picture windows were also installed to maximize the view of the backyard and of the forest and corn fields beyond.

“It was the right thing to do,” Oke says of the renovation. “It certainly added value. We gutted the whole main floor and gave it a new lease on life.” The owner says he and his wife are glad they didn’t downsize to a smaller home. “As it’s turned out, our kids come home, we’re utilizing the space and the four bedrooms and we’re glad we have them.”

The couple’s enjoyment of casual entertaining is evident in the open-concept living area at the rear of the home. Warm earth tones, cherry cabinetry and birch engineered hardwood floors unify the kitchen, dining area and great room.

“We wanted to somehow maintain a homey, comfortable feel to the home,” the owner notes.

“We wanted it to be a home that would be lived in and enjoyed, rather than just viewed.”

The kitchen is well-proportioned and features a centre island that’s faced with cherry beaded panels and topped with a granite counter in shades of tan and chocolate brown. One end is rounded, forming a bar where guests can cluster while the couple prepares dinner. The island is a new element for the couple.

Traditional cabinetry, painted cream and finished with deep crown mouldings, rims the perimeter of the workspace, which incorporates long granite counters. The refrigerator, concealed behind panels, is conveniently positioned between a walk-in pantry and two wall ovens.

Beside the kitchen, the dining area is furnished with a long wooden dining table and eight leather parsons chairs – a theme that’s repeated in the great room. A brown leather sofa and loveseat provide comfortable seating in front of a cherry entertainment unit that spans one wall.

A bar equipped with an under-counter wine fridge is tucked away unobtrusively to one side.

Because the house has been wired for whole home audio, guests are able to enjoy music and DVDs throughout the home.

“We can enjoy the same space and that really suits our lifestyle both from a family point of view and a social point of view,” the owner says. “We like to have people in and we like to enjoy them, and it just didn’t work the way it was before.”

The owner says he and his wife are glad they remained in their home. He believes it’s important for homeowners to discuss an idea with a contractor who renovates and also builds new homes.

“Oke Woodsmith really gets it in terms of trying to understand your lifestyle and your specific needs. They excel at coming up with ideas and then walking you through the detail and implementation stage. The Oke Woodsmith team were a part of it all the way through,” the owner adds. 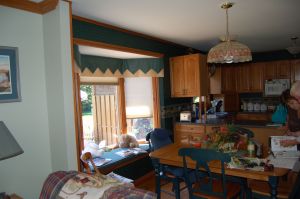 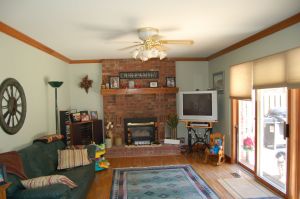 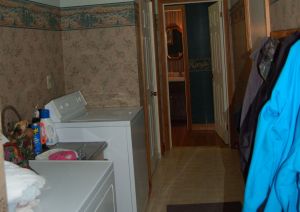 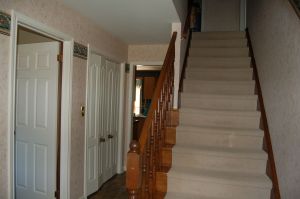 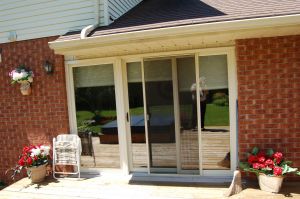 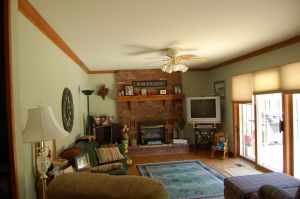